If you've ever played the "Meth Cook" role before, you'd be familiar with the 7 available cooking options. These are:
Meth, Crystal Blue, Glitter, Kronole, Melange, Kalaxian Crystal and MDMA.

All of which, are separated in various categories of Difficulty: Easy, Medium, Hard and Expert.

Additionally, all these types of meth exhibit their own distinct Values Per Gram, and Cook times. Meanwhile, all yields (The quantity you can stuff in a box) is 2,500 Grams, with the exceptions of Meth and Glitter at 5,000.

However, with all these unique options to choose from, have you ever asked yourself which Meth makes you the most money?

This is the exact Question I set out to find, and of which I am here to answer in this short report. I must clarify that this report is all about what Meth makes the most in the Span of 1 Hour. Therefore, ignores the "Risk/Reward" Element of Meth Cooking, meaning that all rarities excluding Expert, will not be apart of the study conducted. As these other Meth types are Easier to cook, they consequently yield less in profit. So, the Meth Types being investigated are the Following: 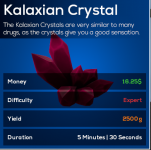 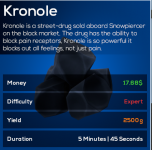 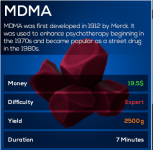 So Essentially, You have a Short, Middle and End range, Shorter Cook Times meaning less money per gram and the opposite on the contrary.

So how do we figure out what Meth Makes you the most money?

Utilizing very simple equations like our Times Tables! Shows us what Meth will make you the most money on an Hourly Basis.

Here is the Math to answer the latter:

Then, by employing the Formulae of: Complete Batches x Income Per Gram = Gram Per Hour or C x I = G
After that, we then use the Formula G x 60 = Total Per Hour, so that we can then concur, that in theory and Per Hour:

So, ultimately that should mean that Kronole, is the absolute best Meth Type for money making in Dark RP.

However, other Money Jobs such as Fuel Refiner, Miner and Weed Grower can make you a lot more in one hour. To prove this I played each of these classes and this is how much I made in Approximately 1 Hour:

So Meth Cook, must be just shit. No, not at all, in fact, Meth Cook is the best for Making money. The fact is, Giga Chad Meth Cooks will always cook 2 Batches at the same time. It is difficult; however, the results are well worth it. Let me Show you.

So what changes are made when we cook 2 batches at a time? Well Firstly, we must double the Yield in profit Per Gram. Meaning MDMA's $19.5 now becomes $39 etc.

So how much money will you make now? Through using the Formulae's: C x I = G and G x 60 = Total Per Hour we can now deduce that:

As you can see there is an outlandish difference between the Yields when we up the Batch Numbers, the numbers theorise that in 1 hour, you will make an approximated $988,900 or roughly, an astonishing 1 Million. That's nuts and it almost sounds too good to be true. That's because it is.

In reality you will inevitably miss a Quality Check, your meth will explode because multitasking, accompanied by unfortunate lag spikes, RL distractions or just mistakes, are things that just happen. As a consequence to the flaws of human nature, this will ultimately decrease your overall profit. So what did I do? I had a crack at it myself, twice. Of course while using Kronole, our mathematically superior Meth Type. Here's what happened.

Furthermore, it's important to remember that Meth Cooks can own printers, a stark contrast in comparison to jobs like Miner and Fuel Refiner, meaning (Rough Estimate and with VIP Printers) I could have made 1.1 Million, in One Hour Alone.

I want it to be noted however, that I am a pretty bloody good Meth Cook. I've been using the Mod for a while, so as a less-experienced cook you should expect to make much less.

Is the official, best Meth Type for cooking.

I would appreciate any feedback and I'm very open to suggestions on what I should conduct my next research on next!

Thank you all for reading.
Last edited: Sep 26, 2022
Reactions: Shant Sanocki, TerrA, fisckii and 1 other person

Another job you should research, which metals sell for the most as miner
Reactions: Conan

Easte said:
Another job you should research, which metals sell for the most as miner
Click to expand...

That is a great idea
Reactions: Conan

I might have a tackle at this again myself as me and Terra buffed it, definitely a million times better. I've been making 2 batches and I make 720k (I think?) every session so maybe if you're keen update it so I can see what is worth more or not.

it just sucks that it generally comes down to the freezer shit taking forever and not the meth itself
Reactions: Conan

Gah damn this is really good conan saves me the trouble so thank you!
Reactions: Conan
You must log in or register to reply here.
Top Bottom