An Issue with crouching with fading doors

Subject of suggestion
As the current rules stand, having a fading door that leads into a base must not force the player to crouch or decrease their walking speed. My main issue with this rule is the current map implemented bases that allow this - see below. For example, this base that is currently on the map does not follow this rule and allows players to build their base inside and players that wish to raid my couch in order to enter.
My main issue
My main gripe with this is the fact that this rule can be bypassed by the utilisation of the current map base with the forced crouch entry. I feel as though this is a lot more overpowered than my bases entrance - see below. My base has a fading door that can be pick locked for the lower half and if the keypad is cracked both props will fade. Not to mention the small distance that you would have to travel under my prop to enter the base, compared to the inbuilt tunnel which is extremely long. I understand that this rule is in place for a reason, so you can't have this big fuck off tunnel to get into a base however you can easily build in a base that has one already supplied and is in bounds with current server 'rules'. The outcome I would want from this post is to see the removal of the inbuilt base, which isn't hard. Or the altering of the rules to allow small crouching sections. The small crouching section in my base hardly conflicts with movement as it takes you around half a second to navigate underneath the prop. As it stands from a discussion from an admin, 'my base is illegal'. I don't agree with this as it's still perfectly raidable and there is almost no inconvenience by crouching to pick the prop.
Media 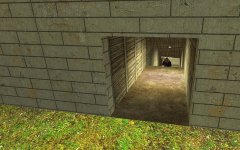 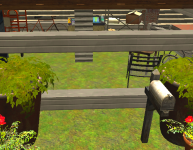 The map's built-in crouch entrance base isn't as useful as you may imagine. The reason for this is that you cannot build in that tunnel since it is against the rules, but you also cannot build on the sides of the tunnel, which means you cannot have shooting windows or anything else on the sides of the tunnel. For example, if the tunnel was intentionally designed by a player, it would have shooting windows, gates, twists and turns, but you can't accomplish this with the map's pre-existing crouch tunnel. In summary, the built-in tunnel base does not enable you to accomplish anything within the tunnel; you can only build once the tunnel is completed. Unlike if player-created crouch tunnels were permitted. Also the tunnel base is quite small limiting what players can do.
Reactions: Ivan Milat
You must log in or register to reply here.
Top Bottom